Then listen to the same loop for 10 minutes and do the same. you may write down any thoughts that occur to you while the loop plays.

And finally, listen to the loop for 30 minutes and record you experiences. you may write down anything you are hearing, you may also list words or images that the sounds evoke, or write down any thoughts that occur to you while listening, even if they seem to be out of the blue. you may also simply describe the sounds as you hear them.

I will tell my friend you are unavailable
The man from the next room, what is his problem?
Is there a formal requirement for the children to be out of sight?
The cutlery is in a dance
There are small moments that are flying by unnoticed, but they are present
You seem upset, is there anyway you can be placated with simple foods?
There is a projection for success in the distance
Lost in the muck is another driving motivation
Even in the swamp I can hear the game blaring
the forest is not quiet
What is the place where the trees grow directly out of the sand?
My feelings are a curdled soup and the light is too bright this morning
I have my feet in sand, and there are ants drumming along my sole
Saurians of the clouds, is there anything I can get you?
Whether you attack me with scissors or with knitting needles, it docent matter bot pierce my flesh
The disturbance made all the contents of the shelves come down
There is a disagreement over what can be done at the back stairs
There is an argument that no one will ever see, but I can hear it
Driving across town there is a battle for attention amongst the roadsigns
What has become of my willpower in the face of the weather
I had an opinion, but it was eaten away over years of stillness
There is a stillness in each window
The light from the windows mean there is a bright light inside the house
What is the foundation really made of?
Sand warblers
Ant is with wings
A scared cat runs upstairs under the bed
Crawl onto the roof, but do not stand up because of the wind it’ll suck you right off

Upwards
Rising foam
Low sounds, prickly rumblings
I hear an organ playing in the next room
Or across the plaza
Pulling tape off of skin
Climbing the mountain in the rain music
Operational amplifiers over heating in the sun
Can’t get to the end of the pier
Looking over the edge ant the rocky end of an overlook
The shadow of a flock of birds
There are too many clouds to go out
In the workroom, the machine is on
Disengage with rapid shifting, it then plods
There is a swirl of sand and paint
Engine of the mouse motorcycle
Filling out the elevator in a tree glade
Its from the 1990s, its old
Here we see the drummer references dying in a vat while he plays
We’re going to grip the rubber edges of these baskets while we carry them, thank god they are heavy
The ducks follow me from room to room
We have an entire class of insubordinates, professor
Old library sounds against the lacquered wood and leather
The window is open
There is a swell
The drums break through
Its someone in a kitchen with a small drum
The boat eases up next to us
There is a car in the distance
Its engine noise is glitching off and on
The microphone I am using to speak is popping on an off
The radio isn’t working and only makes dim squawks
We’ve got a lock on the lost bikes, lets take your bike to get there
I can’t continue to speak to this crowd through a megaphone its unreliable
The high feedback is like a police siren and the tire breaking
The kid with the terrible custom car
There is someone playing I piano in a field
We are getting ready for dinner, we are clicking the plates and forks
I have the feeling I’m inside a bathroom, there is the sound of water on porcupine
A fire in a small hut wakes you up as it gets hotter
There is a hole in the backyard and it should be avoided, you can hear the neighbors through it
Back the truck up to unload the palettes, there is a shearing sound
I feel suspended in front of the control panel
There are many choices, all the switches light up
A large snail like creature, skulks along the balcony guard-rail
I go into a meat store, and I buy a large amount of baloney and they wrap it in paper
Rolling down a small hill we have a malfunction of the wheels
There is something coming up the drain, I will clear it but the gunk comes up black
There are reeds along the drive, and there is a pipe in the thicket
We see a small boat in the distance, and walk back up the wooden staircase
The symbols ring out as the last note is played
There is a dry spot on stage where someone hasn’t spilled a drink yet
There are tires over glass on blacktop
You have to prime the pump a few times before it will flow out
We have to have a sound that announces your arrival to the main house
There is a way into the house through the driveway
Pouncing
Wires in the air send signals across the valley
We have a shopping list, but not enough hands to carry everything with
If I wake up and we’re on stage playing, you hold your palm horizontally and touch your temple twice
If you can see small rays coming out of the vent
There is a garden, and the rain has just stopped, and I can hear the nearby road
Rigorous churning in a large wooden building
We have an understanding that the engine will never fail
I can hear the end of the trip the car pulling up radio still playing
The mood is spoiled and the club no longer feels inviting
They are bailing hay, carrying it a few feet and throwing it up
There is a man walking across a field holding a bundle of sticks
There are birds and they are angry
There is a simple song playing across the gentile hills
Rabbits lay in a field
There is weather vane, turning as the wind changes
A turbine collects the energy of the wind
We can make it up to the roof before the moon comes up, take the outside stairs
There exists a broken portion of the roof, don’t go over there
You can step onto the road and break it
Weeds growing up between cracks in the stone drive
An outer glass wall, leading into the garden
Everyone is staying in large canvas tents
The tents flap in the wind, which is angry
There is a ratcheting strap holding the tents to the trees 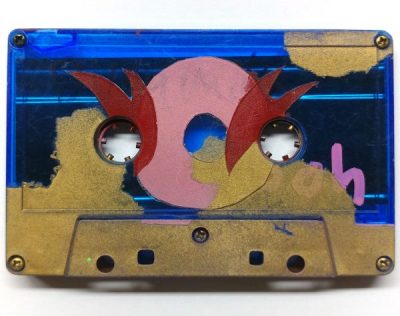 This tape is from 2011 when I was installed in a clock tower by a venerable new york city arts institution. I had a room with too many couches in it, and i made tapes in the tower room. its was full of old clunky clockwork electronics, vibrating radiators, and straight up ghosts that would make you turn around without warning. this tape is full of melted electronics and touching circuit board sounds. it is a fundamentally “bad” recording, straight into a tape deck, lots of noise, but also with a small distorted bass melody. a synthesizer brought low and corrupted by the sounds of filthy and undependable electronics 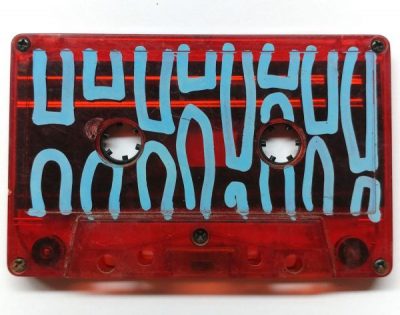 This tape comes from when i lived in a punk house filled with acoustic instruments, there was an electronic organ in a room with 4 other electronic organs, that year someone was throwing them out all over the city and somehow the house i was in ended up with 4 of them.the red color of this tape shows me that it was recorded in 2004 or 2010. there is a forgetfulness to the melody contained within. it reminds me of not remembering, and I think it sounds like I was rushed, like i was trying to get the recording before being shooed out of the room. 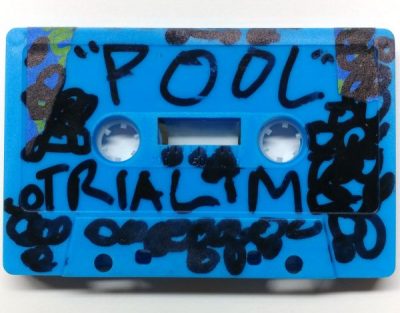 This tape is full of noise and terror built originally for another composition that was about partisan rancor and tribalism in space. fish men vs the crab men, stuff like that. it was constructed of feedback and overdriven oscillators, and it reminds me of failing, not understanding and hopelessness, as at the time of its making i was trying to make some evil tapes to confound more beautiful recordings with. the word “trial” is on this tape, and i get the sense that the trial went badly. 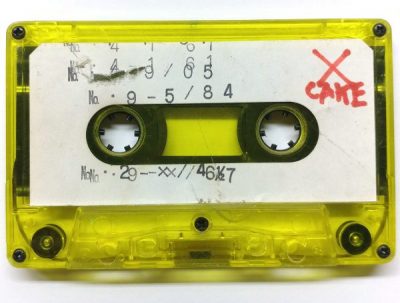 this tape is from 2005 when i lived in a basement and had floods all the time and hung out with people who were too young even though i was in my mid 20s. I remember that this tape was made when i had a friend over, and that friend is long gone from my life. this is recorded in the vestibule leading to the backyard, and variously breaks into a harsh radio and chanter improvisation, before cutting back. this tape is pre cut up, going back and forth between a small talking drum recorded in a small room with the mic close, to outside with radio and chanter.