Listen to the above loop for 30 minutes and record your experiences. You may write down anything you are hearing, you may also list words or images that the sounds evoke, or write down any thoughts that occur to you while listening, even if they seem to be out of the no where. You may also simply describe the sounds as you hear them. Every stray thought counts.

tl;dr – listen to the loops and write down your thoughts while you listen.

This information is for academic and creative purposes only, it will inform my writing and conclusions for this art project, and I will only post about it here on this website. Your personal information will not be shared. 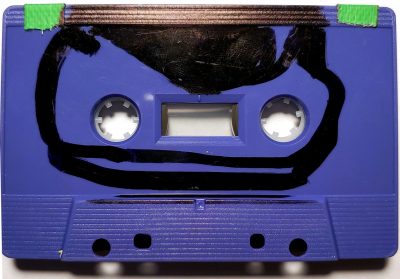 This tape is from 2018, from when I was working on a project that needs “sounds of folding” its a looped sample of someone dropping a plastic cup on the concrete floor of an outdoor pool in Virginia. The recording has a ton of other ambient noise in it. The sample is sped way up and has a filter applied to it, among other warping effects. This is a “folding” sound to me. One piecemeal moment mangled many times to give an impression of folding and refolding. 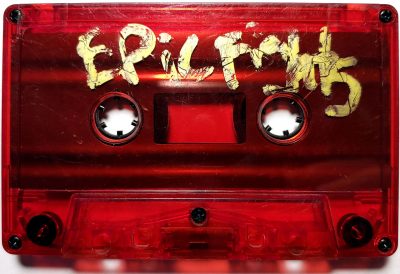 This tape is from 2010. It is a series of recordings taken from the ambient songs used to soundtrack low budget history documentaries concerning smarty people recreating midivil weapons for “science” and because its cool. these documentaries sometimes have sweeping footage of fields that are suggested battle sites, and there is often overwrote music that suggests chivalry and knightly battles. This one was really over the top. 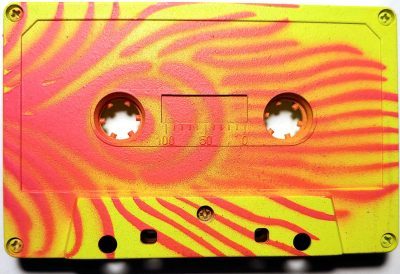 This tape is from 2020. I have an old red electribe SX in my living room, hooked to record player. This is from a series of freewheeling sample sessions that sometimes results from cooking and eating. The “gesh” is our idea of a sound that a peacock makes, which the sounds on this tape evokes. Think of a peacock unfurling its feathers and then snapping them closed continuously. 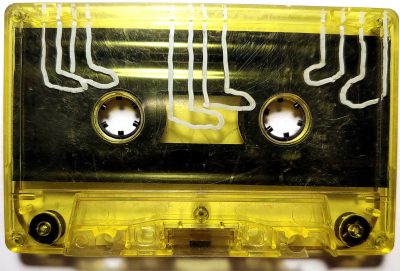 This tape is from 2005. Its the sound of a recording session done outdoors in front of an art gallery near a hotdog stand in upstate NY. the sound is oscillations and broken electronic sounds from some converted and mangled children toys, but the sound of the air outside is part of this sample. This is part of a recording of a live jam session using these toys. So, this is a sample of performed music, despite its terrible timbres. The drawing on the tape is the audience at this show.