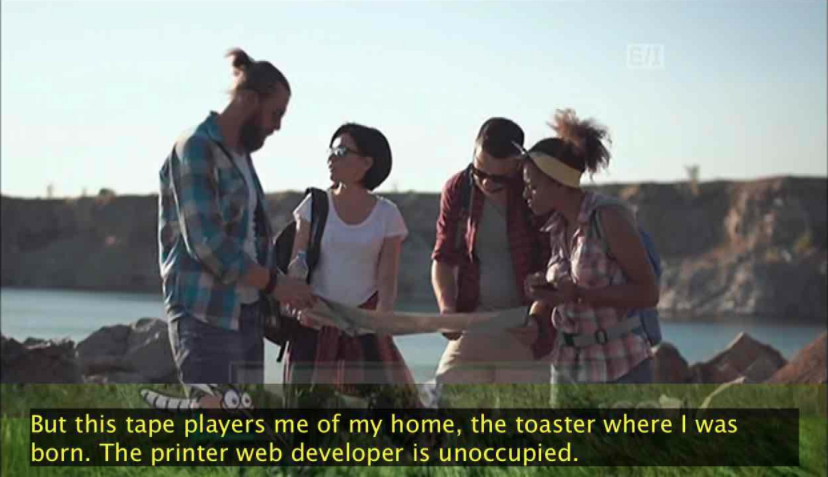 Damon krukowski goes to a sound art show at the MET, and finds that it lacks “boogie”, specifically a curatorial sensitivity to dynamics, which we might recognize rationally as a possible trait that sound displays while hearing it. But he outlines that it did not seem to be a priority when putting together this flagship sound art show. remember dynamics? are dynamics in sound even a possibility? or is it something that we should be de-prioritizing in our listening? does including a sensitivity to dynamics make it harder to curate sound art works? does a sensitivity to dynamics result in a less spectacular art show? does it make less people come? does it make the show less memorable, sacrificing sensitivity for, say, one piece over the flow of the whole show?

you cannot hear the dynamics of this work in the gallery–you get only the loudest bits.

Krukowski’s work charting and enumerating sonic qualities that we may be missing out on in the technological rush to disseminate sonic art, music and information widely is inspiring to me, because it is ultimately a catalog of ways of hearing that humans could possibly forget by prioritizing an attempt to perpetually “evolve”. I don’t mean evolve as in “get better at” i mean the zombie-like infinite increase of capitalistic innovation, and how this progress results in continually almost reflexively developing different ways of listening. since the point is to change continuously, and therefor be always listening anew, we don’t focus on what there is and has been to listen to.
i can lament this personally, because dispensing with sonic dynamics seems unhealthy and unsustainable to me, but if thats the pervasive listening environment humans would find themselves in via cultural inertia, then there is little we can do but escape and retreat from it when we can, nurturing small pockets of different listening habitats within a larger framework of maximum compression. this echos the old mainstream/underground divide, but its a subtile thing to attune phenomenological sensitivity not exactly to what we are listening to but how we are listening. Again, it depends on your personal priority within the senses, would you rather enjoy the dynamics of sound, or would you miss that a particular art work was not included in a show?
Theres something about this species of sonic maximalism that makes indulgent sense. its hard to make the case for subtle in a cultural sense. If you like something, you should have all of it all the time, and if it seems unsustainable, well, you’re just being negative. Its like really enjoying gummie worms, and having a big bag of gummie worms in front of you, and rather than just eating 3 of them you eat the whole bag every time. There is no such thing as a few gummie worms. in this metaphor, gummie worms come only by the bag. I see this a lot in many things, and there are a lot of art and cultural critiques that boil down to “there is a diminishing respect for subtly and nuance in such-and-such field”. Taking time, being careful, respecting silence and dynamic range, slowness, long term thinking, etc. Its all not totally verboten, its just not a priority.
i find it interesting when this maximization is applied to the sonic realm, because the time centric present-ness of the act of listening presents a different set of terrifying cultural problems than the conscription of the other senses. the act of listening is a habit, and the experience of hearing continuously trains us to listen. because in a moment of listening one is completely filled up. it is very difficult to hear one sound in the mind while another plays into the ears. I’m not sure that a listening culture that prioritizes a constant maximum compressed dynamic, can be unlearned simply by listening to sounds with more dynamic range. the instinctual training creates a mode of listening where we don’t know what sounds we are missing, they could be sounding around us, but we have forgot how to listen.
there are a lot of factors, human beings adapt to their environment and our filters prioritize information we deem useful, often decided a priori. But we have also, as a society, made decisions ceed the work of deciding what is fit to listen to to our machines, our externalized functions that, while on paper are meant to save time and brain power, also centralize decisions and create a reining hierarchy, a veritable conspiracy of listening.
This reminds me of the work of Eaamon Bell, who looks at the history and development of the compact disk. Without an aggressive program of algorithmic decisions made to decide what is a mistake or not, music and sound reproduced on compact disk would be making a lot more noise along with the content. there would be a lot more glitching and motes of mechanical stirring, a cloud of commentary that the medium would make while delivering your sonic content. Since music on CD would be marketed as a clean and pure experiance, in contrast to the noiser perpetually colored world of analogue reproduction, this would not do. there were errors and there was music, and the culture as a whole is not one to stand errors. errors are not to be celebrated, they are to be quashed. they are to be silent. Bell, mentioning Sterne here, lets us know just how much the cleaniness of the digital listening experiance was out of the hands of the listener, the decisions about how we listen are no up to us, and anyway, it is sort of a mandate for the manufacturer that we would be missing anything good

Recovering this distinction between CD’s error correction and error concealment, and coupling it with Sterne’s insights, we see clearly how the listening subject is enrolled as a kind of human “interpolator”-of-last resort, but not before many other strategies for error control are algorithmically exhausted by each player. Muting, therefore, is not only an exceptional state of the CD player’s operation when paused or skipping between tracks—as Collins’s Broken Light initially suggests—but also is, in fact, a compensatory strategy that is available to CD players at any moment during playback. Though manufacturers estimated that such uncorrectable errors would be very infrequently encountered by consumers, preliminary research by intrepid audio reviewers suggested otherwise: in regular use, early CD players intervened regularly to conceal and ultimately mute sound much more often than manufacturers admitted. Thus, although it lies entirely beneath the limen of our perceptual capacities, these microscale silences were part and parcel of the technical-media setup of late-twentieth-century digital audio.

Am i really going to complain that CD digital audio technology was too good? No, its more like i am thankful for the work of these writers to give a shape to what kinds of technological decisions are being made around what mediums we deploy our listening with. I like cds, I was part of the early 2000 CDR trading experimental culture, I think they got a bad rap from analogue purists, and each of the pre-streaming audio mediums have powerful totemic physical effects on how we act while listening. I simply chafe at all the sameness, and the reflex for homogeneity that we trade for the modern advantages of maximum distribution and replication. Yes its quick, its speed is impressive, yes its amazing to watch something go viral and go anywhere and know the thing of the day. But i always feel constantly trained, and therefore i am conscripted (of course this is not by accident), and there are techniques and practices, strategies of the senses that seem to be the only way anyone should ever be these days, when in reality they are relatively new, and shall be moved beyond shortly.
Even how we sensuously experience the techniques of media creation, the human proclivity for ignoring or engaging with the world, creating a virtual pocket version to play in, is in a state of continual becoming, where we develop different relationships to time and consciousness via a recognition of how the world should be edited, and that it always be somewhat edited . in a related blog post Bell points us to an illuminating subtlety:

The problem – as I see it – is that this basic gesture of chopping up the time of sound recording was introduced to the vast majority of people (critics and the public alike) much later than it was introduced in visual culture: perhaps as late as the same moment as digitalization (1970s-1980s?), and, as a consequence, was conflated with it.

And later he goes further, asking questions about what the different technological tropes have trained us into possibly being sensitive to:

What’s more interesting, to me anyway, is to think about the questions like: Under what sign did these various actors ally? What alliances across media/disciplines did digital audio need? What is the basic media-theoretic gesture or media-archaeology trope/topos at work in all operative digital audio systems: a cut? a slice? a buffer? a filter? Better, I think, to try to understand whatever the digital audio moment was in terms that are medium-independent, drawing on theories of inscription and the rich parallel tradition of writing about visual culture, and in terms that avoid making prior distinctions between analog and digital technology the linchpin of the critique.

I personally burn with the constant desire to not sort sonic experience into ‘analog’ and ‘digital’ as a mere reflex. broad categories help us parse the enormity of experience at first, but then become traps where we might think they are not merely aspects of a whole. Digital experience is the very air we seem to breath contemporarily, we hear about it enough in every discipline and medium; but in actuality life is a constant negotiation between analog experience mediation between digital organizational/analytical processes. The digital world is our human dream of a fully externalized nervous system. Just like I am continually skeptical about the falseness of (or limited use of) a divide between old oppositional heuristics like mind and body, or nature and humanity, analogue and digital are simply different aspects of our externalized senses, worlds we build for ourselves and then forget that we built them to transfix, and they tell us that at different times we desire different amounts of purity and ease, of indulgence and forgetting, We want to pretend that there are no errors and we only want to listen for what we think we want.
Its unfailingly cool. Its a posture held in place with trained musculature.
but to me, its ultimately like eating nothing but candy all day everyday.